Although small, this group of about 400 early printed books are the rarest items of their kind in the museum's collections. They include, above all, the oldest Bohemian Hebraica and Judaica, the oldest works produced by Hebrew printing houses in Italy, Germany, Holland, Poland and Switzerland, and the oldest Christian literary works on Jewish topics. These books date from the 15th century (including six incunabula) through to the 19th. In terms of content, they are mostly religious and liturgical writings, but there are also works on history, homiletics, exegesis and philosophy, etc. Although works of Hebraica predominate, there are also printed books in Yiddish, German and Latin.

After Italy, Germany, the Iberian Peninsula and Constantinople, the Bohemian lands became the first place in Central Europe where Jewish printing presses were established. The museum's collection includes the most important books produced by printing presses in Bohemia and Moravia – at first in Prague (Gersonide, Katz, Schedel, Heid, Bak, Landau etc.), later also in Prostějov (Prostitz), Brno (Neumann, Rossmann) and Mikulov. The typographical layout and decoration of the oldest printed books continue the scribe tradition of medieval Hebrew manuscripts. In the 16th and 17th centuries, Jewish printers worked closely with their Christian colleagues, but this collaboration came to an end with the rise of the Counter Reformation. The local Jewish printing houses responded keenly to the intellectual and spiritual needs of their readers.

The oldest printed book in the collection is Seder zmirot u-birkat ha-mazon (Songs of the Sabbath and Grace after Meals), dating from 1514, which is illustrated with coloured woodcuts. This is the second known Hebrew book to be printed in Prague and is the only extant copy of this work at the museum.

Also rare is the second Prague edition of the Pentateuch, Weekly Portions from the Prophets, Five Festive Scrolls with a commentary by Rashi, dating from 1530.

Among the most remarkable books that were printed in Prague in the latter half of the 16th century and the beginning of the 17th are the sermons of the Prague Maharal, which were published in 1605, shortly after they had been given.

There is a special card catalogue for the books in this collection. Printed books from Bohemia and Moravia can be searched in the museum’s online library catalogue, which is being gradually supplemented with records of early and rare books produced by other Hebrew printing presses (often with photographs of the title pages). A bibliography of printed Hebrew books from Bohemia and Moravia in the museum’s collections was published in the journal Judaica Bohemiae (by Bedřich Nosek, Andrea Jelínková and Daniel Polakovič). As a result of large-scale digitization projects abroad, particularly in Israel, many of these editions are already available to researchers online. This is why the overall digitization of the collection's rare printed books is not being considered

The core of the museum's library is the Historical Collection, which comprises the former Library of the Jewish Prague Jewish Community, dating back to 1857. This was developed on the basis of donations and bequests from prominent Jewish figures of Prague, such as Chief Rabbi Solomon Judah Rapoport, the Prague printer Moses Israel Landau and the burial society secretary Koppelmann Lieben. As the collection of rare printed books consists of the most important works from the museum's library, it also contains some of the items from the Historical Collection. Some of the books were already in the museum's pre-war collection while others were acquired during the Second World War as part of the shipments of items confiscated from Jewish communities that had been disbanded by the Nazis. In the subsequent decades, the collection was expanded gradually but sporadically. The main focus of current collection-building activity is on Jewish written works that relate to the history of the Bohemian lands and on material that is of importance for its connection to local Jewish figures. 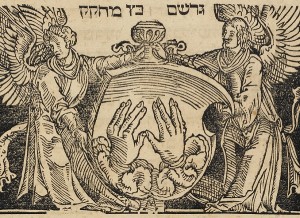 the Pentateuch, Weekly Portions from the Prophets, Five Festive Scrolls

The second Prague edition of the Pentateuch, Weekly Portions from the Prophets, Five Festive Scrolls with a commentary by Rashi. A pair of angels supporting a shield adorned with the motif of hands raised in blessing – the emblem of the Kohenim (priests). Hamisha Humshe Torah, Megillot, Haftarot. Prague: Gershom ben Solomon ha-Kohen and his sons Mordecai and Solomon, 1530; accession no. 170.419 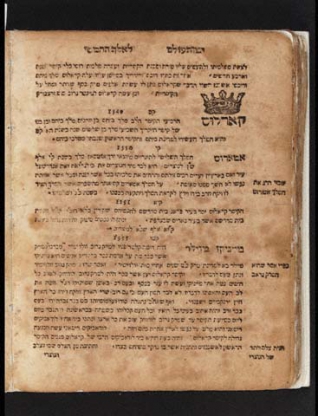 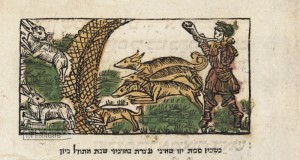 Songs of the Sabbath and Grace after Meals. The Hare Hunt, coloured woodcut. 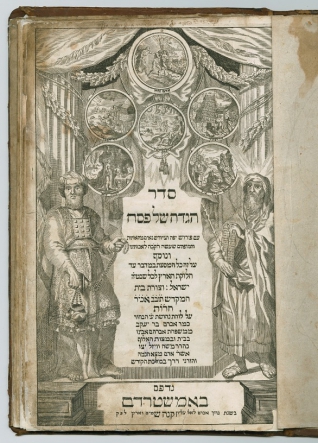 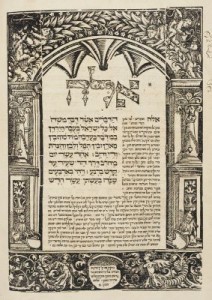 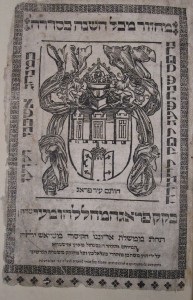 Symbol of the Old Town of Prague