The textile collection of the Jewish Museum in Prague is the largest collection of Ashkenazi textiles in the world. Its uniqueness and importance is underlined by the fact that it comes from a single region of Central Europe – Bohemia, Moravia and Silesia. Due to the way the collection was expanded during the Second World War (collecting en masse without selective criteria), it is an important source for research into the sociological and ethnographic features of the Ashkenazi community in Central Europe.

The core of the collection comprises unique textiles from the 16th and 17th centuries. This includes, above all, a group of curtains decorated with appliqués and river pearls from the period of Rudolph II. Also unique are the textiles that were made at Prague and Moravian embroidery schools at the end of the 17th century. There are dozens of pieces from the period of the High Baroque; those dating from 1700–1740, in particular, are decorated with the most sophisticated fabrics and embroideries. Greater in number are textiles from the second half of the 18th century, which importantly include textiles from rural communities. The most numerous group of textiles date from the 19th century. This includes items whose decoration was inspired by early 19th-century styles, as well as textiles showing the influence of historicism. To a lesser extent, the collection also contains preserved textiles whose ornamentation reflects the influence of Art Nouveau.

The textile collection contains more than 12,000 collection pieces, the bulk of which are synagogue textiles that are traditionally used for religious or decorative purposes. A selection of about a thousand items from this part of the collection is featured in a deluxe catalogue from 2003. The largest group are Torah mantles (more than 4,200 items), followed by Torah curtains (more than 2,000 items and more than 100 fragments), valances, bimah covers, cushions and canopies. The collection of more than 1,800 Torah binders and fragments is truly unique group, the bulk of which are featured in an attractive catalogue (with an index of names and places) from 2009. The collection of personal textiles includes a fairly large group of tallit and tefillin bags (more than 500 items), as well as almost 200 head covers, about 200 items of clothing (particularly kittel) and about 300 tallitot. There is also a slightly smaller group of festive covers. The remainder of the collection contains a variety of items, such as flags, banners, masonic textiles and carpets.

The core of the collection originally comprised textiles that were acquired at the time of the Museum’s founding in 1906 – these items were saved from synagogues (the Great-Court and the Zigeuner) that were demolished during the clearance of the Prague Jewish ghetto.

). The collection was significantly expanded in 1942–45, during the existence of what was known as the Central Jewish Museum. At the time, it acquired not only nearly all the textiles used by Jewish communities and prayer associations throughout the Protectorate of Bohemia and Moravia, but also certain household textiles and, to a lesser extent, personal items. After such an extraordinary expansion, the collection was at its peak size at this time.

Via the Council of Jewish Religious Communities, some of the textiles were handed back to the re-established Jewish communities between 1945 and 1948. These included hundreds of Torah mantles, curtains and covers, but few of them were later returned to the museum following the demise of many of the communities between 1949 and 1989. The loss of such items may be described as the greatest loss for the textile collection in its entire history. Acquisitions to the textile collection were rare after 1945. The most significant group of textiles was acquired in 1998–2000 as a result of the museum's own research in the genizot (storerooms) of synagogues in Bohemia and Moravia. 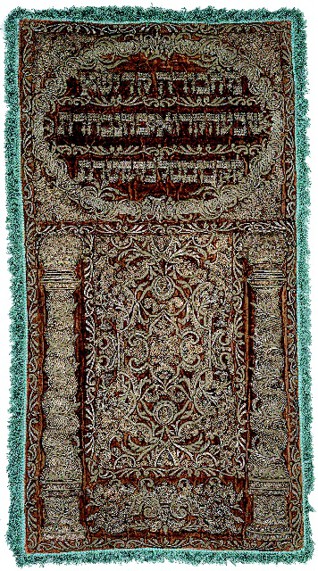 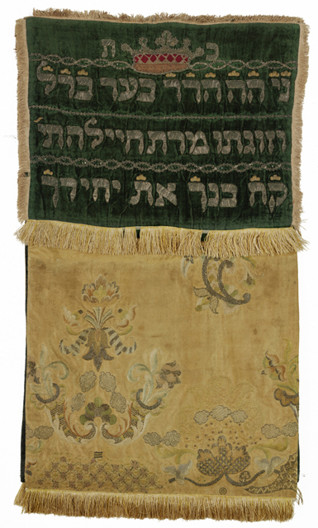 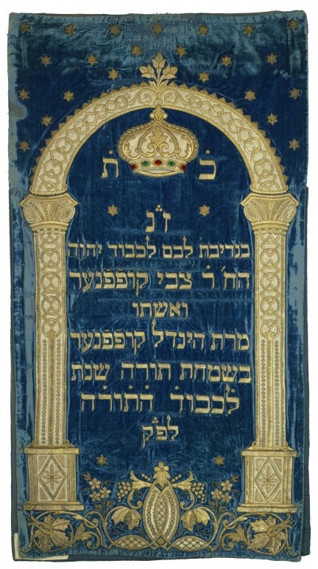 Torah mantle donated by Hirsch Kuffner and his wife Johanna 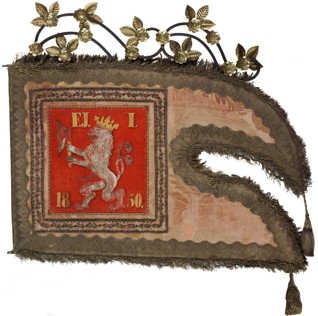 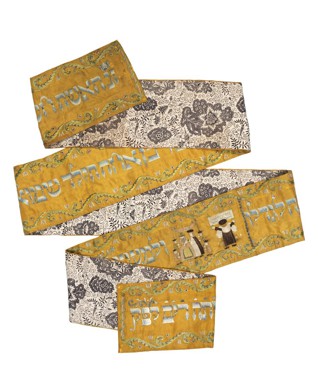 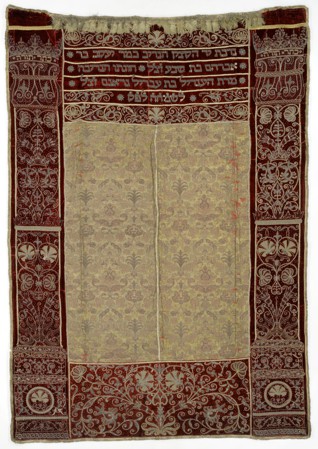 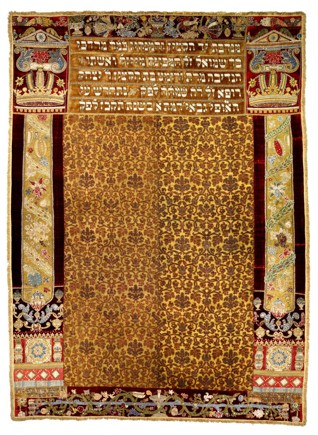 Torah curtain donated by Mordecai Maisel and his wife Frummet

Inv. No. JMP 031.749 (on display in the Maisel Synagogue), silk appliqué, embroidered with freshwater pearls and Bohemian garnets, Bohemia (Prague), 1592 (renovated 1767), acquired by the museum in 1942-45 from the 'Maisel Synagogue' collection point in Prague 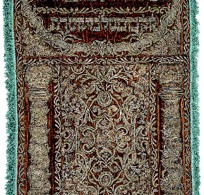