This is the largest collection of Jewish manuscripts in the Czech Republic, with more than 2,000 items of various provenance and age. It is focused on Hebrew and Yiddish manuscripts relating to the Bohemian lands and also contains Genizah papers. It also includes literary works and archival documents that are of great artistic interest, in particular written material relating to the life of religious communities and individuals. The geographical focus of the collection is Bohemia, Moravia and Silesia, although it also includes manuscripts from Germany, Italy and the Netherlands, among other places.

The rarest manuscripts in the collection include medieval Hebrew codices with liturgical, exegetical and religious-legal content, mostly from the Ashkenazi region. Synagogue prayer books from Bohemian and Moravian Jewish communities are the earliest examples of the traditional work of local Jewish scribes and illuminators. Also represented in the collection is the last heyday of Jewish manuscript illumination in the 18th century – namely the work of the Moravian School of Penmanship (Aaron ben Benjamin Zeev Herlingen of Jevíčko, Nathan ben Shimshon from Velké Meziříčí, etc.). The collection also contains several hundred liturgical synagogue scrolls, in particular Esther scrolls from the late 17th through to the early 19th century, mostly of Italian provenance. Before the Second World War, Torah scrolls were not usually part of the collections of Jewish museums in Bohemia and Moravia. It was not until after May 1942 that Torah scrolls from the Protectorate of Bohemia and Moravia appeared in the Prague Jewish Museum. In the 1960s, more than 1,500 of these scrolls (out of a total of 2,000) were sold by the Czechoslovak authorities to a private purchaser in London. The museum also has a group of family scrolls (megillot), which describe true stories in which individuals have been miraculously saved from various disasters that have struck the Jewish population of Bohemia.

After liturgical works, the second largest group comprises halakhic, exegetical and homiletic texts. The collection also contains autographs and copies of works and lectures given by well-known scholar-rabbis who were active in Bohemia and Moravia, such as David Oppenheim, Jonathan Eybeschütz, Ezechiel Landau and Moses Sofer. Also in the collection are works relating to philosophy, medicine, natural sciences, history, teaching, fiction and poetry. The preserved Kabbalah manuscripts are mostly copies of famous works, some of which were written in Moravia where the Kabbalistic tradition was developed under the influence of Eastern European Jewish Mysticism.

The collection also includes a unique, self-contained group of decorative plaques (such as shiviti and mizrah) from households and synagogues, dating from the mid-18th century onwards. Zeh ha-shulhan plaques are examples of folk art and are specific to Bohemia. Among the corporate records are artistically interesting memorial documents and statutes, as well as circumcision and Yahrzeit lists. Among the family-related documents are ketubbot (wedding contracts), bills of divorce and Yahrzeit plaques, as well as family cookbooks.

Microfilms of most of the manuscripts are available to researchers at the Jewish Museum in Prague and at the Institute for Microfilmed Hebrew Manuscripts at the National Library of Israel, Jerusalem.

The core of the collection comprises manuscripts from the library of the Prague Jewish Community. Most of these manuscripts were bequeathed by Jewish scholars who were active in Prague, such as Solomon Judah Rapoport (1790-1857). Some of the material was also part of the collection of the pre-war Jewish Museum and a large amount of valuable manuscripts came to the museum during the Second World War as part of the wartime shipments of property belonging to Jewish communities that had been disbanded and subsequently liquidated by the Nazis.

The collection was gradually expanded in the following decades. As a result of research into the genizot (storerooms) of Bohemian and Moravian synagogues carried out in the late 1990s and early 2000s, the collection gained about a thousand manuscript and printed fragments, some of which are extremely rare. About a tenth of this material has been incorporated into the collection so far, the rest awaiting conservation and treatment. 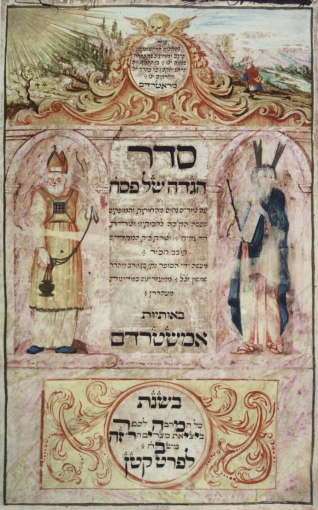 Inv. No. JMP 013.352 Haggadah shel Pesah (The Story of Passover) Illuminated manuscript on parchment Scribe: Nathan ben Shimshon from Velké Meziříčí Acquired by the museum in 1942-45 from an unidentified collection point, probably from the collection of the pre-war Jewish Museum in Prague (1906-1940). 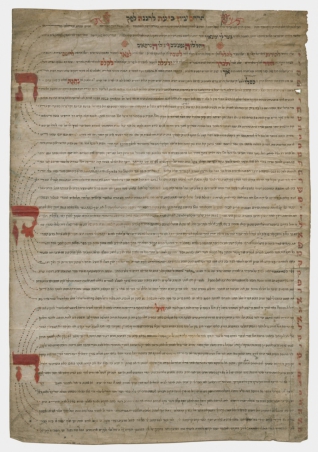 Inv. No. JMP 179.562 Family megillah of Joseph Shohet, son of Hersh Mizlap from Prague Manuscript on parchment Prague, po 1744 Acquired by the museum in 2009; purchased via the Sotheby's Auction House, New York. 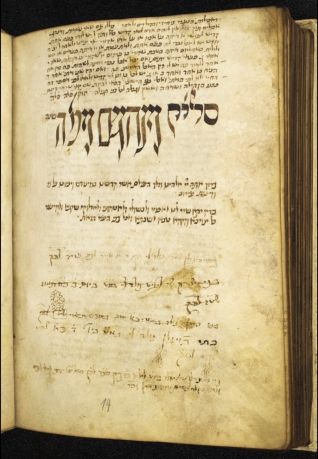 Siddur. Prayers for the Year Round

Inv. No. JMP 168.460 Siddur. Prayers for the Year Round Manuscript on parchment Regensburg, 15th century From the depository, previously in the library of the Prague Jewish Community. 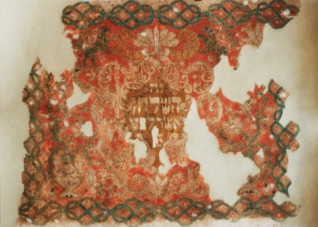 Inv. No. JMP 177.937 Zeh ha-shulhan plaque. Adornment for a Festive Table Paper, graphite pencil, coloured Bohemia (?), 2nd half of the 18th century Found in the genizah (storeroom) of the synagogue in Luže (1996)