The Shoah Documentation Department focuses on processing written records and photographs relating to the Second World War and the Shoah. Originally called the Holocaust Documentation Centre, it began its work in the then State Jewish Museum in Prague on 1 October 1969. It was put together by the historians Anita Franková and Anna Hyndráková, who as children had both gone through the Terezín ghetto and the Auschwitz-Birkenau concentration and extermination camp. The way they organized, arranged and inventoried the collections of documents, photographs and books provided the basis for future research.

Characteristics of the collections

The core of the Shoah Documentation Department’s archival groups consists of two collections: ‘Terezín’ (inventory and appendices) and ‘Documents of Persecution’ (inventory). These contain a large amount of diverse materials, including official files, the personal papers of Terezín prisoners, literary works, musical scores, diaries, memorial books, and magazines. The department also looks after the personal papers of the prominent Jewish composer Gideon Klein (inventory) and the violin virtuoso Egon Ledeč (inventory), as well as a number of documents and photographs of an official and personal nature. This material is supplemented on an ongoing basis. Donations and loans of items from individuals and institutions are still being received and are gradually processed. The department also oversees the Jewish Museum’s unique Oral History Collection, which contains more than 1,750 testimonies from Shoah survivors and their descendants.

The Shoah Documentation Department provides research information and services to the general public and specialists alike from throughout the world. Each year it completes hundreds of research tasks, provides consultations (in person and in writing) and supplies information about Shoah victims and survivors. Intensive work is also focused on digitizing and editing archival materials, which are progressively being made available through an online collections catalogue.

Research queries, information retrievals, and requests for information that require searching and excerpting specific archival materials, archival finding aids, documentary materials or other specialist sources are chargeable if they require more than 60 minutes to carry out.

The department systematically cares for the Memorial for the Victims of the Shoah from the Czech Lands in the Pinkas Synagogue. Subsequent to verification, ongoing corrections and additions are made to the memorial’s information about Shoah victims. Photographs of inscriptions of victims’ names can be provided upon request. The department also has an alphabetical digital database and a family card index of Jews deported from the Nazi Protectorate of Bohemia and Moravia. This material is available via an information kiosk inside the synagogue and via a web interface.

Materials kept in the Shoah Documentation Department are made available for study under the terms set out in the Research Rules after filling out a Research Form.
In-person study and consultations are available by prior appointment via e-mail or telephone (see below).
Opening times: Monday and Wednesday, 9:30 a.m. – 3 p.m. or by appointment. 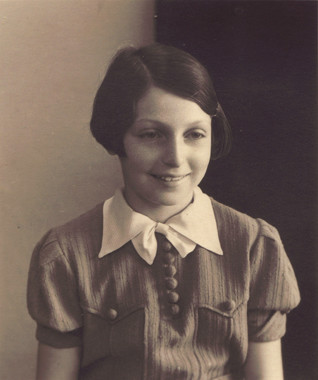 Thirteen-year-old Ruth Brösslerová came to the ghetto with her parents and younger brother on 28 January 1942, arriving on Transport U from Brno. In her diary she not only provides careful and remarkably observant chronological accounts of events associated with the life of the girls in the L410 barrack but also reflects on the reality of the surrounding adult world and ghetto life, and contemplates the future. Both of her diaries contain a number of drawings and documents that have been pasted in (e.g. her family's transport numbers, tuition confirmation), as well as notes by other people. Ruth Brösslerová's diary was provided on loan by her daughter's family, and a copy was made for the Terezín Archive Collection. 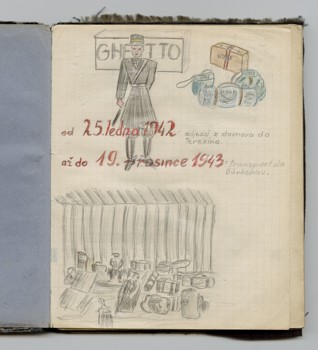 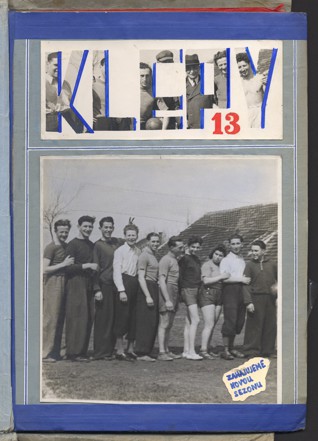 Klepy (“Gossip”) was a secret magazine created during the Nazi occupation in 1940-19 by a group of Jewish children from České Budějovice who used to meet up at the local 'Jewish Pool' – one of the few places that Jews were allowed to go. The magazine featured humorous texts with drawings and photographs, which in the course of time devoted increasing attention to such issues as persecution, youth work, emigration, Zionism and so forth. The magazine editor was Rudolf Stadler, the uncle of the people who donated this valuable document to the Jewish Museum. Most of the youngsters from the 'Jewish Pool' in České Budějovice, including the magazine editor Rudolf Stadler, perished during the war. A member of this group of youngsters was Viktor Kende, the father of Hana Kende (England), and Jiří Kende (Germany) who kindly donated complete and original set of mostly bound copies of the magazine to the Jewish Museum in 2001. This material is now kept in the Persecution Documents collection. 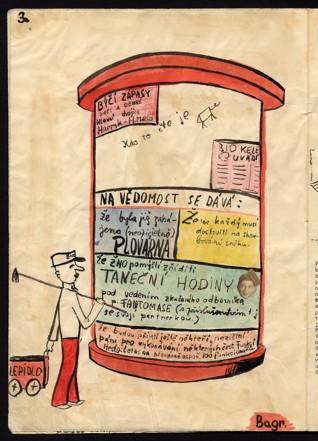 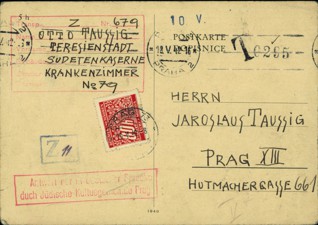 Postcard from the Terezín ghetto

Postal contact between the inmates of the Terezín ghetto and the outside world was strictly regulated and, where permitted, was subject to rigorous censorship. As a result, written communications often contained allegory, for example with regard to requests for food to be sent. In a card written in block letters to his brother, Otto Taussig informed his brother that he was weak from pneumonia and that “Uncle Lard has died.” Together with his wife Jana, son Karel and daughter Maire Helga, Otto Taussig was put on Transport Ds, which was dispatched from the Terezín ghetto to the Auschwitz-Birkenau death camp on 18 December. None of the family survived. This postcard is part of the Terezín Archive Collection. 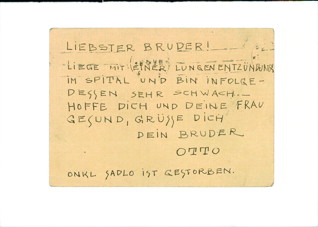 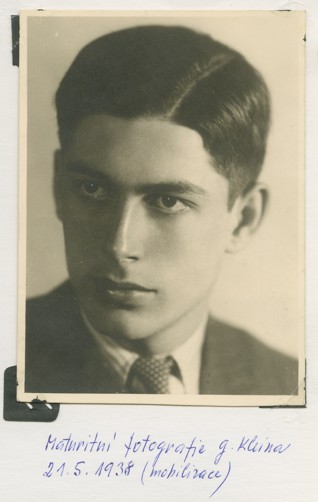 Gideon Klein perished in the Fürstengrube concentration camp in January 1945. His graduation photograph was kindly provided to the Jewish Museum by his sister Eliška Kleinová. This document is kept separately in the Gideon Klein Papers.