On Thursday, 26 January 2023, on the occasion of the commemoration of the International Holocaust Remembrance Day, the Jewish Museum in Prague, in cooperation with the Jewish Community of Prague and with the financial support from the Foundation for Holocaust Victims, organized a gala concert in the Spanish Synagogue.

The concert featured works of Viktor Ullmann, Ervin Schulhoff, Hans Winterberg and Pavel Haas, all extremely talented composers who were kept prisoners in concentration camps during the WWII. The music was performed by soprano Irena Troupová, accompanied by Jan Dušek on piano.

It has been a great honor for us that the concert was personally attended by Mrs. Dita Kraus, a 93-year-old Auschwitz survivor. 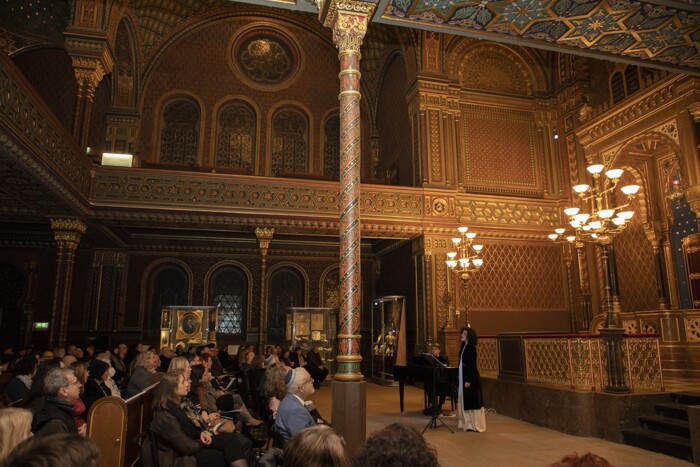 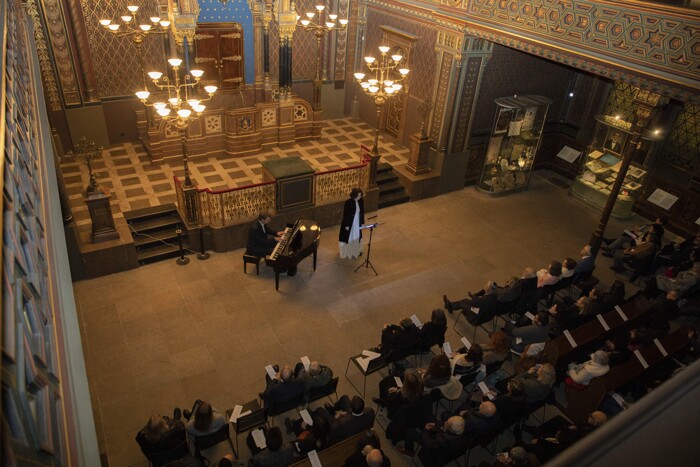 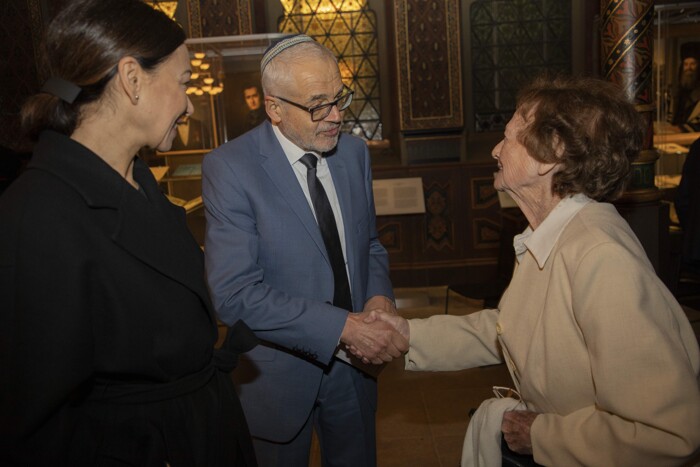 THE JEWS IN BOHEMIA, Vol. 8

A compilation of papers from the eighth seminar on the history of the Jews in Bohemia, which was held in Jindřichův Hradec on the 12th and 13th of October 2021 by the Jewish Museum in Prague in association with the Museum of Jindřichův Hradec.

Like the previous editions of the seminar – held in Liberec 2006, Nýrsko 2008, Tachov 2010, Trutnov 2012, Teplice 2014, Kadaň 2016, Třeboň 2018 – the 2021 meeting of archivists, historians, Hebraists and regional museum staff dealt mainly with recent topics relating to the history of the Jews in the Czech border region.

The focus of attention is on the historical development and legal status of the Jews and Jewish religious communities in Bohemia from the 18th century through to the Second World War. Included are papers on prominent Jewish figures, assessments of archival sources relating to Jewish history in Czech archives, essays on the Holocaust period (in particular presenting data collected on the fate of Jews from the Czech border region), regional topics, research documentation on Jewish cemeteries, and research on NKVD documents.

Almost 280 pages in length, the proceedings contain 16 studies with a wealth of illustrations, including photographs, graphs, tables, and archival documents. Each paper has an English-language summary. 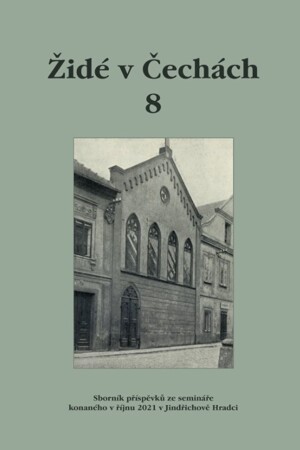 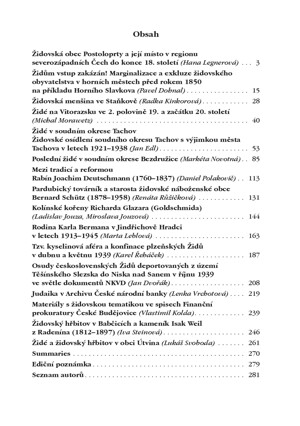 
A new issue of the journal Judaica Bohemiae (Vol. 57/2022, 2) came out at the end of December 2022. It starts with a study by Kajetán Holeček which deals with the topic of Jewish migration and mobility between Bohemia and the Polish city of Poznań after the expulsion of Jews from Bohemia in 1541. Drawing on newly discovered archival documents Iveta Cermanová explores the impacts of the burial reforms introduced by Maria Theresa and Joseph II in the Bohemian Jewish community with particular focus on Prague, and highlights the changes in Jewish burial practices that took place as a result of these reforms.

In the Reports section, Michaela Sidenberg draws attention to portraits from the JMP’s Visual Arts Collection, Jana Šplíchalová discusses the stories behind materials relating to the Shoah that have recently been acquired by the JMP, and Lenka Uličná provides information about the ‘Secrets in the Attic’ exhibition presenting the finds from the attics of Bohemian and Moravian synagogues. Markéta Lhotová gives an account of the exhibition ‘Obrazy zášti: vizuální projevy antijudaismu a antisemitismu v českých zemích’ [Images of Malice: Visual Representations of Anti-Judaism and Antisemitism in the Bohemian Lands], which was held by the Liberec Regional Gallery at the end of 2021. Tomáš Krákora reports on the eighth annual ‘Jews in Bohemia’ seminar in Jindřichův Hradec, which was held by the JMP in collaboration with the Museum of Jindřichův Hradec in October 2022. Lenka Blechová discusses the 12th Congress of Czech Historians, which took place in Ústí nad Labem in September 2022, and outlines the papers on Jewish history that were given there.

Published since 1965 by the Jewish Museum in Prague, Judaica Bohemiae focuses on Jewish history and culture in Bohemia, Moravia and the wider Central European area (the territory of the former Habsburg Monarchy). The texts are published in English and German.

You can buy the latest issue of Judaica Bohemiae online at the museum’s site by clicking the link below
https://www.jewishmuseum.cz/en/e-shop-en/publications/judaica-bohemiae-lvii-2/ 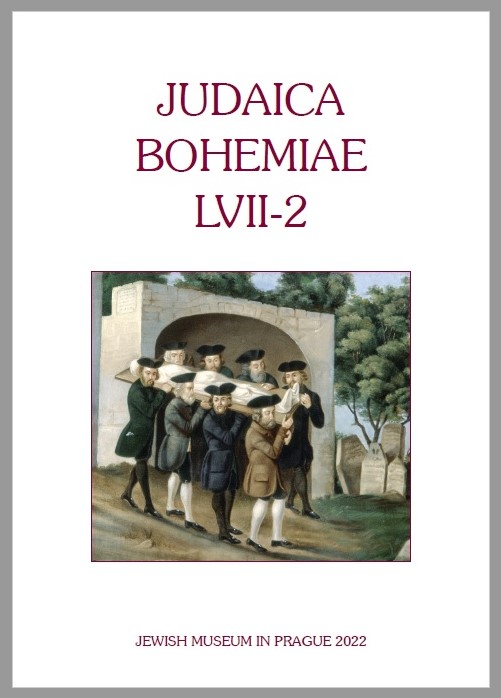 On December 11,2022, US Deputy Secretary of State Wendy Ruth Sherman visited Prague on her trip to Europe. At the Pinkas Synagogue she paid her respects to the victims of the Shoah, visited the permanent exhibition of Children's Drawings from the Terezín Ghetto, and saw the Old Jewish Cemetery. Her guide was Leo Pavlát, the director of the Jewish Museum in Prague. On this occasion, she presented Mr. Pavlát with a letter of appreciation from the U.S. Secretary of State, A. J. Blinken, a longtime friend of former U.S. Secretary of State Madeleine Albright. 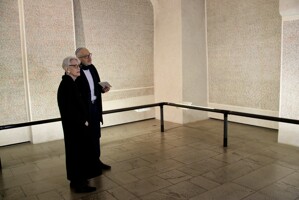 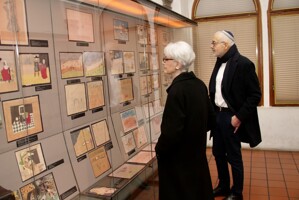 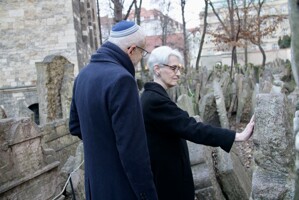 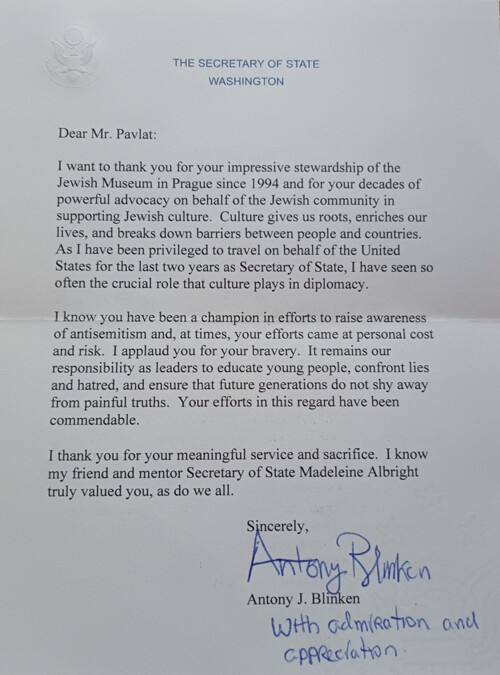 The Jewish Museum in Prague will provide Ukrainian refugees with free access to its exhibitions, and the Jewish Community of Prague will give them free access to the Old-New Synagogue (Altneuschul). Entry tickets can be picked up at the museum’s Information and Reservation Centre, Maiselova 15, Prague 1–Josefov.


EVACUATION OF COLLECTIONS FROM UKRAINE

The Jewish Museum in Prague is prepared to help safeguard Ukrainian museum collections. In response to an appeal received through the Association of Museums and Galleries in the Czech Republic, we have offered to provide expert curatorial assistance (especially with Judaica) and assistance in handling collection objects, should Ukrainian collections be transferred to the Czech Republic.

STAY IN TOUCH THROUGH OUR DIGITAL CHANNELS 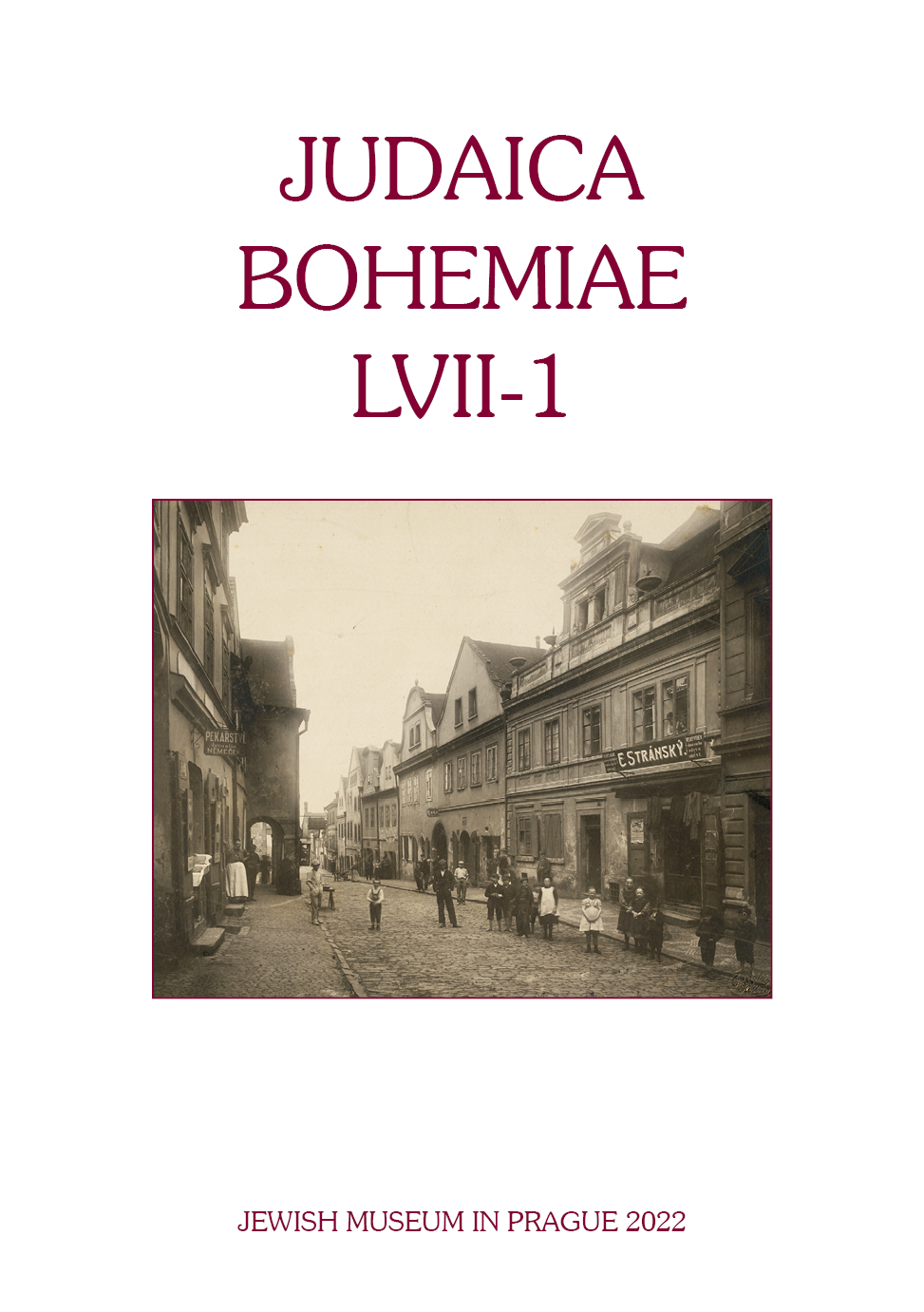 You can buy from JMP e-shop
Judaica Bohemiae LVII - 1 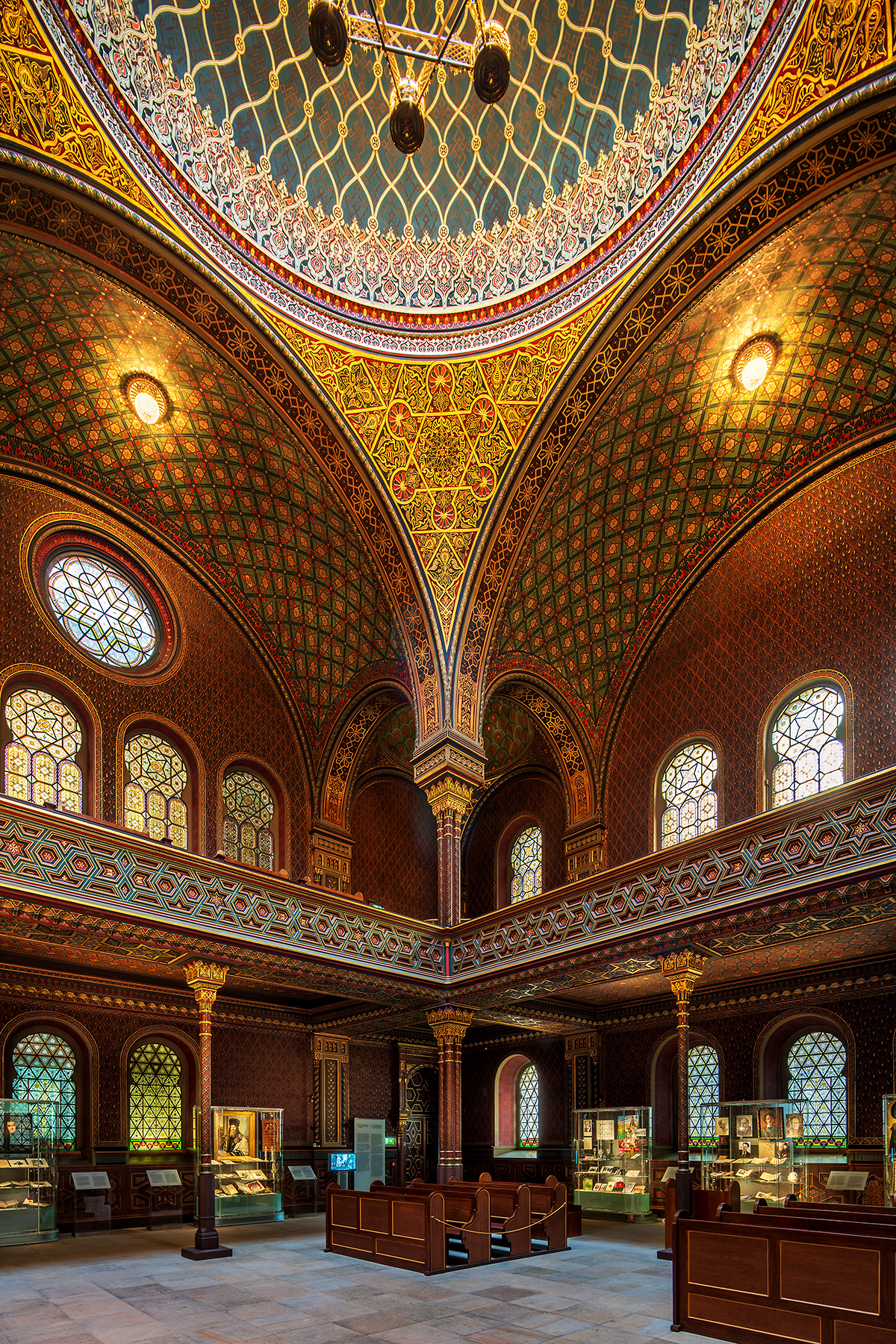 Visit the Spanish Synagogue after reconstruction with a new exhibition Jews in the Bohemian Lands, 19th-20th Centuries 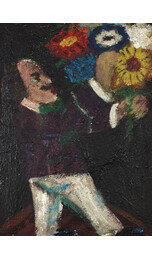 Please note that the library will be cl... More information

HELGA HOŠKOVÁ-WEISSOVÁ: NOBODY EXPECTED US

At the beginning of this June, experts from the Jewish Mu... More information 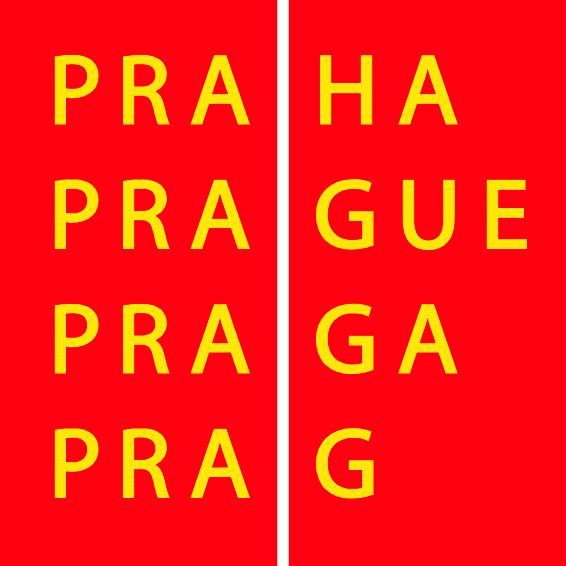 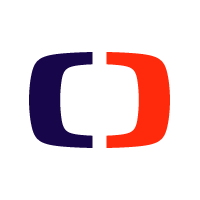 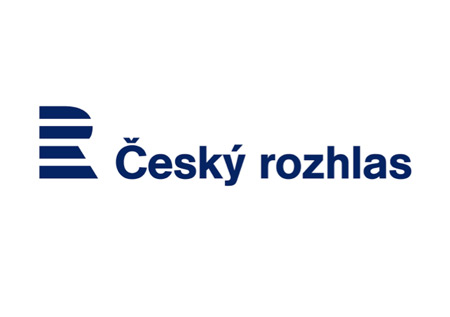 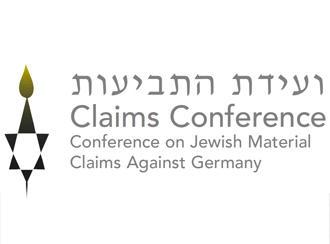 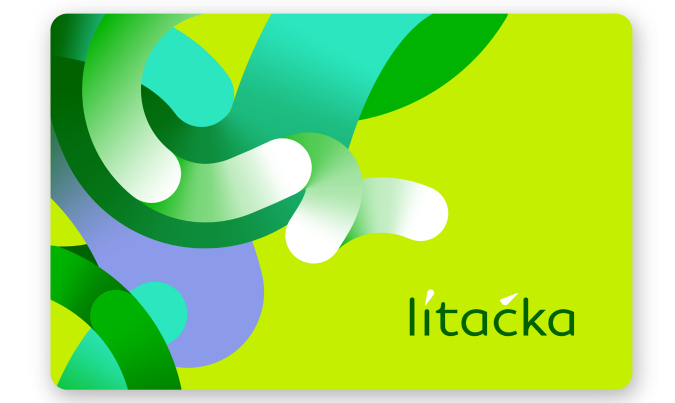