The birth of a child is one of the most important events for a family and community no matter what the culture or religion. Parents the world over wish for nothing more than to bring into the world a healthy child whom they will be able to properly raise in a stable and safe community.

The Jewish community views childbirth as fulfilling the primary mission of marriage (in Genesis the Lord instructs the first couple, Adam and Eve: “Be fruitful, and multiply, and replenish the earth”) as well as fulfilling the covenant between God and Israel, for which the Lord blesses His people and propagates them. The wedding ceremony among Ashkenazi Jews is performed under a blue canopy embroidered with a number of small stars to symbolize the blessing bestowed by God on the patriarch Abraham: “and in multiplying I will multiply thy seed as the stars of the heaven.”

For a Jewish community it was very important to anticipate the child’s sex. If a boy, then there was very little time to arrange for a mohel, who performs the ritual circumcision. The methods of determining the child’s sex pre-birth were quite similar to those practiced by the majority: if the woman experienced pain in her back, that signaled the likelihood of a boy, but if there was pain in her belly, then she would probably give birth to a girl. To protect the woman from prematurely giving birth, any number of amulets might be worn, and incantations or various forms of magic practice were also employed. In the room where the woman lay, a printed or paper-cut amulet – usually containing Psalm 121 and the names of her guardian angels – was either hung or pasted directly above the woman or on the screen separating her from the others. These amulets are known as kimpet-tsetl (from kimpet, which in Yiddish means childbed) and they served to protect the expectant mother as well as the newborn from Lilith, who, according to folklore, was Adam’s first wife and thus spurned, takes her revenge by murdering newborn infants.

Several particular rituals are performed shortly after the birth of a child. A boy is circumcised, during which he receives his name. A girl receives her name in the synagogue on the first Sabbath after birth when her father is called to the Torah, and the name chosen for the girl is then ceremoniously announced to the congregation. The first week of life of a newborn child is considered to be the time of greatest risk, and therefore the circumcision itself is preceded by special rituals. One is the Shalom Zakhar, which takes place on the evening of the first Sabbath after the birth of a boy (it is the first and only Sabbath eve in his life when he is not protected by the covenant). Family and friends gather at the home of the mother and newborn to celebrate with a festive meal, give their blessings, and welcome the newborn into the world.

In Judaism, the circumcision is an important ritual of initiation that entails removing the foreskin of the penis. The ritual is performed eights days after a boy’s birth, but only if he is healthy and able to undergo the operation. The circumcision is never performed on a child from a family with a history of blood-coagulation disorders, such as hemophilia. Among Orthodox Jews a quorum of no fewer than ten men must be present. Women may look on from their section of the synagogue. Left of the Ark is the circumcision chair or bench. One of the two seats is reserved for the prophet Elijah, whom God has appointed witness to the consummation of this especial covenant, the other is for the sandek, who is usually one of the highly esteemed members of the community, such as the rabbi. The kvatters carry in the baby boy (who is usually swaddled in a special cloth) and are greeted by the congregation saying barukh haba (Blessed Is He Who Comes). The boy is then given to the mohel, a professionally trained circumciser, who places the infant on a special pillow on the seat for Elijah. The boy on the pillow is then placed in the lap of the sandek. The mohel recites a blessing, then the boy’s father, followed by the entire congregation, recite a blessing that ends with: ""Just as he has entered into the Covenant of Abraham, so may he enter into Torah, into marriage, and into good deeds."" After that the mohel takes his instruments – a protective guard and knife – and performs the circumcision. He uses a special tube to suck some blood from the wound, and then the boy’s diaper is changed and he is clothed. A blessing is then said over a cup of wine, after which the mohel pronounces the boy’s Hebrew name (which might be different from his common secular name). The ceremony concludes with a few drops of wine placed on the boy’s lips and the mohel recites the following words from the prophet Ezekiel: “When I passed by you and saw you wallowing in your blood, I said to you: ‘Live in spite of your blood.’ “

It was customary to use the particular fabric a child was swaddled in during the circumcision to make an object that was then donated to the synagogue upon the boy’s first visit. It took either the square form of the original swaddling, which was then made into a cover for the bimah (the reading table), or it was cut into strips that were sewn together into one long band to be used to bind the Torah scroll. Both types were embroidered, painted, or printed with a long Hebrew inscription, which identified the boy (usually naming his father as well) and giving the date of his birth. The second part of the inscription contains a benediction that echoes what is recited during the circumcision ceremony: “May the Lord grant that he grow to the Torah, the chuppah, and good deeds.” Today there are extant from Bohemia and Moravia over 1,000 circumcision Torah binders, 160 covers, and around 70 other types of textile objects on which appears the characteristic dedicatory inscription giving information about the birth. The oldest come from the latter half of the 17th century while the most recent come from right before the Second World War. Torah binders and covers from circumcision swaddling are a unique form of historical document whereby their embroidery records the births of hundreds of Jewish children.

The boy ceremoniously dedicated his circumcision object during his first visit to the synagogue. This customarily took place at the age of three or four when the boy could act relatively independently and was able to learn simple texts. The father accompanied the boy to dedicate the binder, cover, or other object to the Torah scroll as proof of his covenant with God. The ritual is called in Yiddish mappe schuletragen (bringing the binder to the synagogue). Another opportunity appropriate for donating a circumcision object to the synagogue was at the first haircut (Hebr. halakah), which generally takes place at the age of three. This ritual symbolizes the cutting of the child from the mother, a rite of passage from infancy.

In Czech. To organize a guided tour in English, please contact Noemi Holeková at noemi.holekova@jewishmuseum.cz 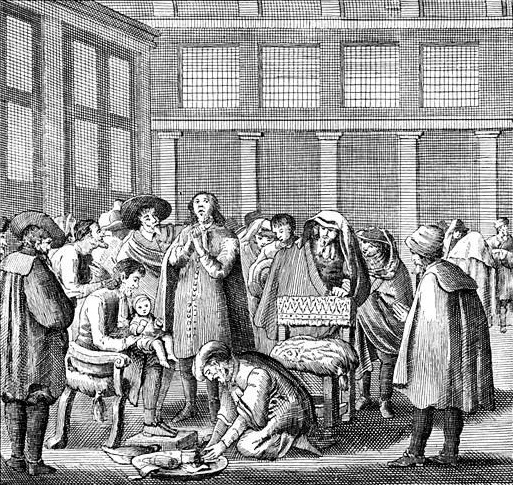