Helga Hošková-Weissová is one of the very few survivors among the children who were interned in the Terezín ghetto. She was born in Prague on 10 November 1929.

Her father, Otto Weiss (1898–1944), came from Pardubice and became a bank clerk in Prague. Helga’s mother Irena (1906–1990), neé Fuchsová, was a seamstress. She was born in Prague and attended the Smíchov Synagogue. In the fourth grade, when Helga was ten, she was expelled from school along with the other Jewish children on ground of race. For some time she attended tutorials for children in private apartments that were organized by the Jewish community, as well as doing her own studying and reading. Her father paid great attention to her education, promoting her interest in art and literature. Like many others, Helga began a diary during the period of forced isolation; in it she commented on the increasing amount of anti-Jewish bans that were affecting the everyday life of the whole family. One month after her 12th birthday, on 7 December 1941, Helga and her parents were put on one of the first transports to Terezín. Along with various necessities, she brought her diary, crayons, watercolours and a sketch pad with her in her luggage. After arriving in Terezín, the family was separated. Helga and her mother were placed in the Dresden Barracks along with the other women; her father lived in the Sudeten Barracks, later in the Magdeburg Barracks. It was to be seven months before the family met again – in July 1942. Helga then moved into Girls’ Home L 410 on the square next to the church, where she lived with girls of the same age in Room 24.

“DRAW WHAT YOU SEE!”

Helga spent almost three years in the Terezín ghetto. In her free moments, she continued her diary and drawings. Shortly after arriving, Helga sent her first Terezín drawing – of children building a snowman – to her father in the Sudeten Barracks. On the basis of her father’s advice – “Draw what you see!” – she began to depict life in the Terezín ghetto. In total, she made more than a hundred drawings, which show the conditions of everyday life as well as several exceptional occurrences from the perspective of a 12–14 year old girl. Helga was unusually self-reliant for her age; she enjoyed drawing and was technically proficient. These drawings show an unquestionable talent, an attempt to master form and to provide a vivid insight, as well as a perception of reality and an attention to unexpected detail without stylization or sentiment. She often took note of seemingly unimportant details that enliven her drawings with her own story. In this way, she created a unique and particularly effective group of documents, which differ from other Terezín artworks in terms of their power to convey and their authenticity.

Incarceration in Terezín ended with the October transports in 1944. Helga’s father was put on the men’s transport, which was allegedly bound for a work camp, on 1 October 1944; he didn’t try to avoid it as the men’s families were supposed to be protected. Three days later, on 4 October 1944, Helga and her mother were deported to the east. They arrived in Auschwitz-Birkenau several days later, finding themselves on the ramp in front of Dr. Mengele. They both passed the selection. After ten days in the hell of Auschwitz, they were deported to Freiberg near Dresden, an auxiliary camp of Flossenburg, to work in an aircraft factory. The conditions there were somewhat better, despite the cold, continual hunger and slave work. The only solace were the frequent air-raids, the crowds of refugees and the constant thunder of artillery from the approaching front. In mid-April 1945, Helga and her mother were evacuated from Freiberg to Mauthausen in open coal wagons, almost without food and water. The journey lasted sixteen days. On the verge of complete exhaustion, they were liberated by the U.S. army in the gypsy camp on 5 May 1945. Before being deported to Auschwitz, Helga left her drawings with her uncle Josef Polák, who hid them behind a wall in the Magdeburg Barracks. The drawings were therefore preserved and handed back to Helga after the war. It had been impossible to write or draw anything in Auschwitz, Freiburg and Mauthausen. Soon after her return to Prague on 21 May 1945, Helga put everything that had happened since leaving Terezín in her diary and tried to depict these experiences in her art.

STUDIES AFTER THE WAR

After the war, Helga managed to return with her mother to their pre-war apartment in Libeň. She never saw her father or most of her relatives again, however. Most of the girls from Home L 410 did not return; less than a hundred of the Terezín children deported to Auschwitz survived. Helga was admitted to high school and, a year later, also started a course at the Secondary School of Graphic Arts. She graduated from both schools in 1950 and then applied to the School of Decorative Arts, but was not accepted on account of her overly ‘pessimistic’ view of the world. In the end, she was admitted to the Studio of Monumental Painting under the supervision of Prof. Emil Filla, whose personality and style of work made a deep impression on her. After Filla’s death, Helga continued her studies under Alois Fišárek and graduated in 1955. Helga painted views of old Libeň, portraits and landscapes, and occasionally recalled her wartime experiences; in 1958, she illustrated Arnošt Lustig’s first book Night and Hope. In the early 1960s she began to come to terms with the wartime persecution through art. In a series of large and expressive paintings, entitled Calvary, she conveyed her experiences of the ghetto, the death camps and the death transport. These are dark, almost monochrome paintings, rendered in a sharp and vigorous style, full of expression and dramatic tension. They were exhibited in Prague and Domažlice (1963), Rome, Naples and Venice (1964), Demmin and Greifswald (1965).

Helga went to study in Israel on a scholarship in 1965, the beginning of a brief but exceptionally prolific and joyful period of work. She spent ten weeks in the artists’ colony Ein Hod near Haifa, but travelled throughout the whole country, whose nature and people affected her deeply. Her palette brightened as her pictures were enlivened with the colours of the sun. Her sharp drawing style began to loosen up with smooth flowing lines and ornamental curves, creating strange spiral-like images and compositions of organic shapes. Evidence of deep experience, the landscape penetrates her pictures through the plastic structure of the sand, rocks and shells. She also made dozens of watercolours there, depicting various views of Ein Hod, Haifa, Jaffa and seaside beaches, as well as the Negev Desert. After returning, Helga incorporated her studies and recollections in a series of paintings of biblical landscapes and figurative motifs depicting the world of Orthodox Jews in Jerusalem’s Mea Shearim quarter, which were exhibited at the Spanish Synagogue in Prague in 1968. An exhibition of her drawings and paintings was later held at the J. Baruch Gallery in Chicago. She was gradually becoming known as a painter and soon received her first invitations to take part in exhibitions abroad, but this was halted by the Soviet occupation of Czechoslovakia in August.

In the years that followed, Helga withdrew from public life but taught at a community arts school and worked on book design and applied graphics (in 1966–1987, she designed a number of covers for the Jewish Yearbook). For several years, in the depressive atmosphere of normalization, she did not paint anything. She started painting again at the end of the 1970s. Her new subject-matter is not as clear-cut as before; it often conveys feelings of restlessness and sorrow, as if the old motifs had returned in a different, deeper and more personalized form. She made a group of mostly non-figurative paintings with motifs of destruction and decay, roots and soil that deal with her war-time experiences. A series of these paintings was entitled Disasters. Helga fully returned to painting and traditional Jewish motifs in the 1980s, exhibiting in Klatovy (1984) and Aš (1989) and taking part in group exhibitions of Filla’s pupils in Turnov (1987), Jičín (1988) and Prague (1989).

After November 1989, Helga exhibited many times in Czech Republic, Austria, Germany and Italy. A major exhibition of her work was hosted by the Jewish Museum in Prague at the Klausen Synagogue in 1991. In the same year, she designed a commemorative plaque on the site of the former assembly point on Prague’s Trade Fair Grounds, which was unveiled on 14 October 1991, on the 50th anniversary of the first transport from Prague to Lodz. Helga Hošková-Weissová has made a number of exceptionally valuable groups of paintings and prints which, apart from their artistic qualities, also provide evidence about her fate and the tragic events of the 20th century, to which she became an involuntary witness. Her childhood drawings from Terezín are now known throughout the world. Her later work also provides evidence of the cruel experiences of her childhood, which influenced her entire life. Her work has been featured in many foreign publications and several documentary films. A monograph has been published on her children drawings from Terezín and a Czech Television documentary has been made about her life. In 1993 she was awarded an honorary doctorate from the Massachusetts College of Art in Boston. By visiting schools and talking to young people at home and abroad, Helga is actively helping to educate young people towards democracy and tolerance. As a tribute to her lifetime work, she was awarded the Josef Hlávka Medal in 2009. 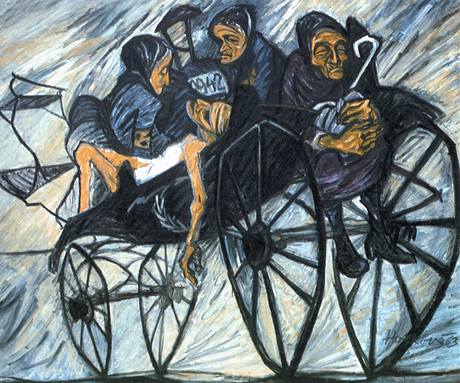