New permanent exhibition in the Maisel Synagogue opens to the public 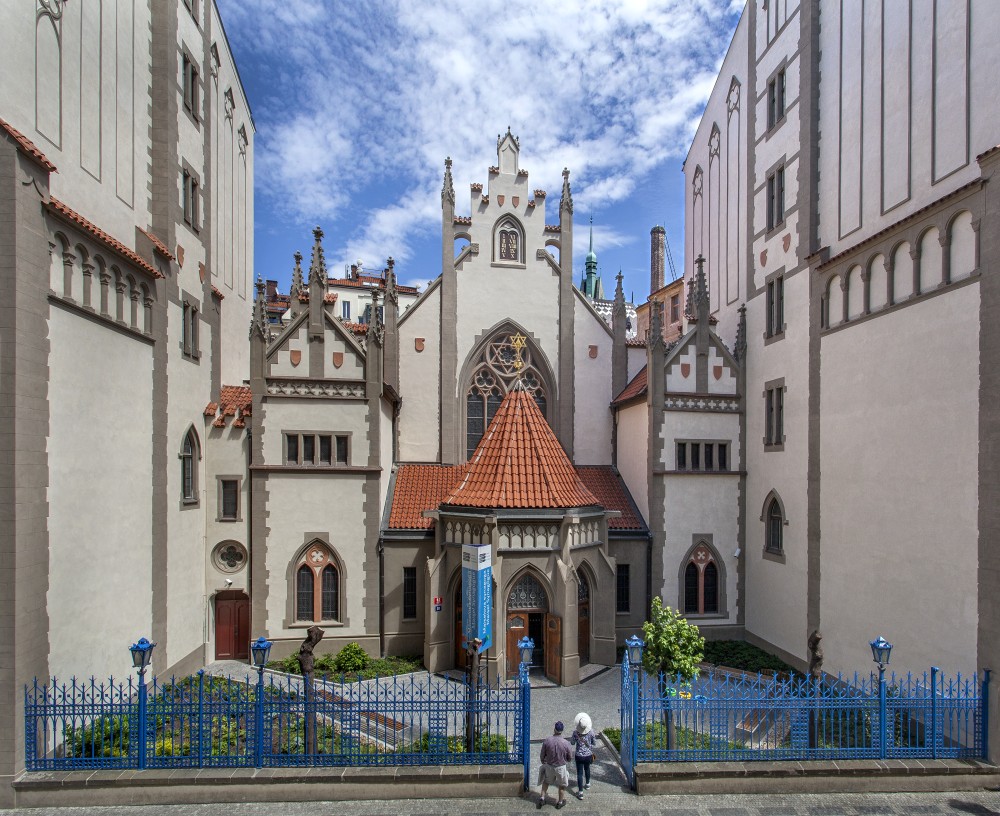 About the exhibition
The Jewish Museum's new exhibition is entitled JEWS IN THE BOHEMIAN LANDS, 10TH–18TH CENTURY. It is based on the previous, thematically similar exhibition at the Maisel Synagogue, but draws on the latest research findings and makes the topic more attractive as a result of its new arrangement, its selection of exhibits and, above all, the inclusion of audio-visual and interactive elements. Particularly worthy of note is the several-minute “Flight Over the Prague Jewish Town” in its pre-redevelopment form, as based on Langweil’s famous model of Prague. This unique virtual tour will be projected onto a large screen in the main nave of the synagogue. It has been put together as a result of a collaboration by the Jewish Museum in Prague, the City of Prague Museum and the Czech Technical University in Prague (ČVUT). The exhibition also has touch screens that feature a rich variety of pictorial materials, which will enable visitors to search the museum's database for information about prominent Jewish communities and personages. Visitors will also be able to “browse” a selection of rare Hebrew manuscripts and printed books, as well as historical maps of Jewish settlements. There will also be an opportunity to have a detailed look at the Prague Jewish procession of 1741 (24th of April), which was held in celebration of the birth of Emperor Joseph II. In addition, there will be an eye-catching projection of photographic images of historic synagogues in Bohemia and Moravia.
The exhibition seeks to convey, in a clear and easy-to-understand yet engaging way, the inner life of Jewish communities in the Bohemian lands and to show the diversity of their relationship with the wider society. It is divided into eight thematic units along the perimeter of the synagogue, which are to be viewed from right to left as in the direction of Hebrew script. The introductory section is located near the entrance below the gallery and deals with the topic of Jewish settlement in the Bohemian lands. The following themes are covered in the south-facing side aisle: the status of Jews in medieval and early modern society, the Jewish community, and traditional Jewish scholarship in the Bohemian lands. The central space of the synagogue around the Holy Ark is dedicated to the “golden age” of Prague Jewry in the Renaissance period, with special attention given to the benefactor and synagogue builder Mordecai Maisel and to the Golem legend. The exhibition continues in the north-facing side aisle, where the focus is on the livelihood and social life of Jews, as well as the bleak topic of discrimination, anti-Jewish riots and spiritual oppression. The exhibition ends with a brief
epilogue in the west end of the building below the gallery, which shows how the Jewish
enlightenment and growing contacts between Jews and Christians in Prague prefigured a
transformation in the life of the Jews of Bohemia and Moravia from the end of the 18th
century onwards.
The exhibition has a well-balanced selection of three-dimensional and two-dimensional items
on display, mostly from the collections of the Jewish Museum in Prague, but also from other
institutions in the Czech Republic and abroad. The exhibits will be displayed in new airconditioned
display cases with modern lighting. The exhibition scenario is by PhDr. Iveta
Cermanová, Ph.D. and PhDr. Alexandr Putík, and the architectural design is by Ing. Arch. Hynek
Fetterle.
In the evening hours, the synagogue will be used as an auditorium for concerts, recitals and
solo theatre performances. This is why, unlike the layout of the previous exhibition, the central
part of the synagogue will remain an open space, so that it can be turned into an auditorium.
This new cultural space seeks to attract mostly Czech visitors.
Following last year's opening of a new Information and Reservation Centre at Maiselova 15,
the reopening of the Maisel Synagogue is the latest achievement in the gradual transformation
of the Jewish Museum into a more attractive, visitor-friendly cultural institution.

About the synagogue
The Maisel Synagogue is one of six properties in the ownership of the Prague Jewish
Community that are part of the tour route of the former Jewish Town of Prague and are
overseen by the Jewish Museum in Prague.
The story of the synagogue dates back to the end of the 16th century, when the successful
entrepreneur and benefactor Mordecai Maisel purchased a plot of land on the south end
of the Jewish ghetto and was awarded by Emperor Rudolf II a special privilege to build a
synagogue there. The synagogue was built in the Renaissance style in 1590–1592 and was
dedicated in its year of completion. For the next hundred years it was the largest and most
prominent building in the Jewish Town, an imposing house of prayer and a religious and
social centre for the Jewish community.
The building burned down in the 17th and 18th centuries and was rebuilt several times during
its existence. Its present-day appearance dates from the turn of the 19th and 20th centuries,
when it was given a Neo-Gothic makeover during the redevelopment of the Jewish Town.
During the Second World War, the Maisel Synagogue was used by the Nazis as a warehouse of
confiscated Jewish property. Ten years after the war it was transferred into the care of the
Jewish Museum, which used it as a depository. A permanent exhibition of synagogue silver
opened here in 1965.
The last partial refurbishment of the building took place in the first half of the 1990s in
connection with preparations for the first permanent exhibition on the history of the Jews in
Bohemia and Moravia from the first Jewish settlements in the 10th century to the beginning
of the emancipation in the early 18th century.

About the benefactor and synagogue builder
Mordecai ben Samuel Maisel (1528 – 1601), court Jew, financier and benefactor came from a not-too wealthy family (Kalamář/Kalmus), which later adopted Mordecai's nickname Maisel as their surname. Thanks to his abilities, Mordecai worked his way up to become one of the most successful merchants and financiers in Prague's Jewish Town during the 1570s. Among his clients were the leading aristocrats and members of the ruling family. He achieved an exceptional social standing during the reign of Rudolf II, who appointed him a court Jew and granted him a number of privileges. In the 1580s and 1590s he also played a leading role in the Jewish self-government. Maisel made use of his great wealth to support education and charities and to finance public buildings, including the town hall, the High Synagogue, public baths, an alms-house and the paving of the city streets. His most important achievement was the construction of the private Maisel Synagogue, which he bequeathed before his death to the Prague Jewish community. Although Mordecai, who was childless, had obtained from the emperor the right to leave a will, his assets were confiscated after his death. After several decades of legal disputes, his heirs – the descendants of Mordecai's nephews – managed to get the confiscation order overturned. The restitution of his assets, however, led to injustices. Following a judgement of 1663, the restituents obtained not only the houses that had been wilfully confiscated, but also the Maisel Synagogue, which Mordecai had bequeathed to the community. A settlement was not reached until the end of the 17th century.

About the refurbishment
The revitalization of this major cultural monument was preceded by two years of preparatory work. In addition to renovating the building and restoring its Neo-Gothic form, a new technological base and visitor facilities were provided for the exhibition, with the addition of disabled access.
The Maisel Synagogue was closed to the public in April 2014. The previous exhibition from the early 1990s was de-installed and work began on the refurbishment project (drawn up by the architect Hynek Fetterle) with the aim of restoring its distinctive Neo-Gothic look from the early 20th century.
Initial refurbishment work involved removing the modern flooring and partitions, as well as the degraded plasterwork, and repairing the roof over the entrance area. The plasterwork, windows, lock fittings and plumbing installations were also repaired. Inside the building, floor ducts were installed for the high and low voltage mains, and work was done on the new sanitation installations. The walls and pillars were treated for rising damp with a combination of damp proofing injection cream and electro-osmotic drying.
The previously white facade is now sculpted, painted in several colours and features decorative elements that have been carefully restored. Intensive restoration work was done inside the synagogue with the use of interior scaffolding. Over the course of the reconstruction, the interior colour scheme of the walls was extended on the basis of supplementary restoration surveys. The interior colour scheme differs from the previous one, which was white. As a result, the synagogue interior has been brought back to the way it looked some 110 years ago.
Hundreds of specialists from a wide range of professions were involved in the refurbishment project, which required hundreds of thousands of work hours. After completion of the
construction work, the building was approved for use in April 2015. The main building contractor was the joint-stock company Konsit. The company LOTECH produced and installed the display cases for the exhibition, as well as the installation elements and the exhibits. The new Maisel Synagogue exhibition and refurbishment project has been entered into this year's 23rd annual non-anonymous public competition “Stavba roku” (Building of the Year).