Georges Kars (1880–1945) is one of the members of the first generation of Czech modern artists whose work is still not sufficiently well-known or appreciated. These artists sought a new means of expression as well as international recognition, which some of them managed to achieve. Unlike his contemporaries, Kars did not attend the Prague Academy, nor did he take part in their first exhibitions. He found his second home in Paris, which was the centre of the international art world in the first half of the 20th century.

Although his artistic development mainly took place abroad, he always followed what was going on in Czech art and culture, regularly exhibited at Prague exhibitions and, in 1938, attempted a permanent return to Prague. He received considerable recognition for his determination to follow his own path and remains one of the most famous Czech artists outside his home country.

Like his Prague associates, Kars was initially captivated by Max Liebermann’s Impressionist works. In 1906–08 he gained considerable mastery in the direct and immediate recording of impressions of natural scenes and urban parks. In Paris he was briefly enchanted by the Fauvists, in particular Matisse and Derain, whose works employed a wider range of local colour and flat composition. He moved to Montmartre at the time of the Cubist revolution, which also had an influence on his work in 1910–14, a period in which his most interesting paintings were made.

Kars’s promising development was interrupted by the First World War, which he spent on the Galician Front and in Russian captivity. After the war he tried to continue his Cubist inspired work but, under Derain’s influence, he soon created his own version of primitive Neo-Classicism with lively paintings of female nudes in natural settings that are remotely reminiscent of Gauguin’s Pacific paradise. Over the next two decades, Kars developed these motifs with an increasingly rigorous modelling of shape and with a deeper understanding of the human figure, portraiture, still-life and landscape.

Kars was initially more fortunate in his life and career than many of his contemporaries; he was free from material worries and was able to devote his full energy to painting in the inspiring environment of Paris and Spain. The world he had become accustomed to and the humanist values he believed in, however, fell apart during the Shoah. After his tragic death, Kars’s paintings were scattered across various public and private collections in Czechoslovakia, France, Germany, Spain, Israel and the United States. The diffuse nature of his work and the impossibility of holding a retrospective exhibition in the past are the main reasons why Kars has not yet been sufficiently appreciated.

The exhibition is curated by Arno Pařík." 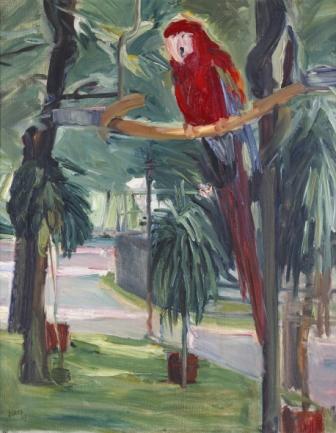