The entries selection comes from the book “Dictionary of Judaica” (2005), which was written by a group of authors led by Eva Kosáková . Entries were further processed by Jaroslav Kuntoš, Dana Veselská, Olga Sixtová, Michaela Scheibová and Lenka Uličná. The book can be purchased at our e-shop.

A decorative plaque placed on the eastern wall of a Jewish home to indicate the direction of prayers (towards Jerusalem, which in the western world means to the east). In addition to the word Mizrah, it may also contain other short texts, such as Psalm 113:3. The oldest extant Mizrah in the Czech lands dates from the end of the 18th century. Mizrahs are usually made of various materials using a broad range of production and artistic techniques – hand-made and hand-written, printed, fashioned using the paper or parchment cut-out technique, or embroidered. The iconographic content of Mizrahs was not fixed, at least at the outset; most frequently, it is decorated with typical Jewish symbols and motifs (the tablets of the Ten Commandments, the menorah*, Moses and Aaron, parts of the furnishings of the Temple of Jerusalem or the Western Wall, symbolic animals, etc.). Sometimes, it is combined with the shiviti plaque*. 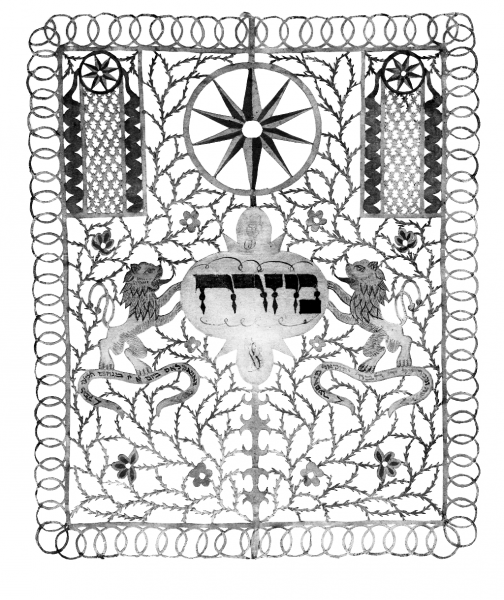