The exhibition Mountain of Mountains: Aleš Veselý’s Desert Projects is a presentation of the artist’s large-scale projects for the deserts of Israel (chiefly the Judean and the Negev), which he has intensively worked on since the mid-1990s.

We live with our own echo. Our efforts resonate in the other world. My true love, my idol, so distant. Hands that want to grasp something in the void. But what are they trying to touch? That which is not there, which we sense and in which we hope. This sight is deceptive. These senses are deceptive. The role meted out to us by life, the position that we have thereby reached, essentially miss the one that is at issue. The role and need of my other self. Man is his own double, his own question mark . That "other self" is his definition. That which is continually and essentially eluding him. He gropes his way towards it, senses and blindly trails it without respite. Everything he has here and now continually turns to nothing. He acts as a fool, as an eternal malcontent. That "other self" is forever provoking him, undermining his efforts. We have an intrinsic need to catch up and unite with him. That "other self", however, has completely different desires. He likes to hide, disappear, escape. He rejoices where we weep. But don't despair, for he's rejoicing on our behalf.

The word “essence” has a range of possible meanings. On a general level it could be classified as the primary, objective, invariable quality of a thing or its characteristic individual nature. From this general definition the concept's specific philosophical meaning can be abstracted. This is understood as an inner character, the true essence of whatever is in direct contrast to everything illusory, phenomenal, arbitrary: that is, to the defining qualities fabricated by our consciousness. Essence does indeed exist, albeit as a spiritual, immaterial entity. As a result, one would have a difficult time grasping such an essence and, given common perception, clarifying it for oneself, let alone communicating it to others.

Restitued Works of Art - The Collection of Dr. Emil Freund

10am - 5pm, except Saturdays and Jewish holidays

On first glance the paintings and drawings the Jewish Museum in Prague has selected to present in its exhibition "Restituted Works of Art" seem not to have much in common. They are not connected by a single distinctive style and one would be hard put to find among them a common theme. Yet an innate relationship between the works exhibited here does undeniably exist. The nature of this relationship was determined by the events of one night - 14-15 March, 1939 -when the German Army occupied the rump of Bohemia and Moravia, thereby altering forever the fates of their original owners.

The production of Jewish liturgical objects seldom finds itself at the forefront of interest in the Czech Republic where it is generally regarded as a closed chapter. In view of tragic historical events there were no new liturgical objects produced after the Second World War; the few surviving Jewish communities made use of liturgical objects that in many cases were hundreds of years old. The exhibition of objects by Avi Biran, complemented by their historical counterparts from the collections of the Jewish Museum in Prague, demonstrates that such objects are made in the present and that these are no mere reproductions of earlier models. 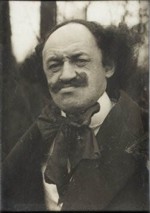 The Jewish Museum in Prague is opening its new exhibition venue, the Robert Guttmann Gallery, with an exhibition of pictures by the popular Prague painter Robert Guttmann. Following the Orlická Gallery exhibition in the Rychnově nad Kněžnou Chateau in 1994, this is the largest exhibition to date of the work of this famous naive artist from the First Republic. This show features virtually all of Guttmann’s pictures from the collection of the Jewish Museum in Prague, as well as numerous pictures and caricatures of Guttmann by other artists, period photographs and documents which the Museum has managed to collect over the years. The Museum would also like to ask the public for help in its search for other pictures, sketches and photographs of or by Robert Guttmann or any other material relating to this artist. 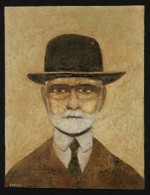 VAVRO ORAVEC - A Painter of Soul

Vavro Oravec was born in the Slovakian town of Tvrdošín in 1915. He studied medicine in Bratislava (1933-38) and then worked in hospitals in Bardejov and Nitra. After the establishment of the State of Slovakia (1939) he helped out in the Jewish Council’s office in Bratislava and taught Jewish children who had been expelled from school. He never took any lessons in painting. The only art education he received was a three-month retraining course in ceramics (run by J. Horová and S. Fischerová) in Bratislava in 1940, which he attended after being prohibited from practising medicine. He was arrested in Autumn 1944 and deported to Auschwitz, from where he was sent to the concentration camps Gross Rosen and Blechhammer. 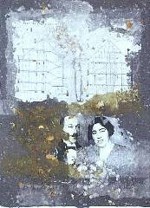 The paper works by Chava Pressburger have an extraordinary ability to give expression to hidden feelings, revive forgotten memories, as well as to reveal a particular presence. They take form from various materials, mostly from plants which grow in the parched desert, in the light of the sun and the stars. Her work is like alchemy, a patient search for meanings and special ingredients which she transforms and returns to life in the world of human speech, endowed with feeling and imagination. In her work she transforms above all herself, her soul, which is purified and uplifted to the unity of the world and nature.

Postcards featuring Jewish subject matter are a mere fragment of the thematically diverse range of the postcards from the period 1898 to 1938. They capture the long lost world of European Jewry, who at the beginning of the 20th century experienced a culmination of their long-standing efforts to achieve emancipation and equality. This world was almost completely destroyed by the catastrophe of the Shoah during the Second World War.

The exhibition Genizot documents one of the lesser known aspects of Jewish tradition. According to Jewish law, discarded Holy Scriptures which contain the name of God must be deposited in a safe place, where they are protected from desecration and subject to natural processes of decay. This also applied to other texts of a religious and even secular nature, written in the Hebrew language or script. The place of storage is known as a genizah (plural: genizot, from the Hebrew root GNZ - literally ”hiding, storing”).