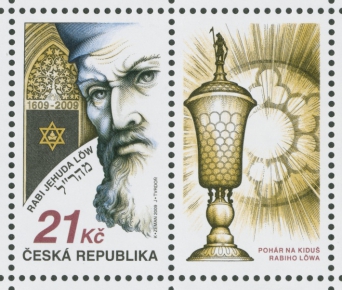 Czech Post (Česká pošta, s.p.) has issued a special postage stamp with a nominal value of CZK 21 to mark the 400th anniversary in September of the death of the renowned Jewish scholar, philosopher and teacher, Rabbi Judah Loew ben Bezalel (better known by his acronym MaHaRaL, which is composed of the initials of his Hebrew title Morenu Ha-Rav Leva, “our teacher, Rabbi Leva”). The life, work and legacy of this hugely important figure in Jewish history, which was also adopted by the Czech National Revival movement, are currently being commemorated in the exhibition Path of Life. Rabbi Loew (ca. 1525-1609). The exhibition will be on view at the Imperial Stables, Prague Castle, until November 8, 2009; it is accompanied by an extensive catalogue. Printed in full-color offset, this stamp features an imaginary portrait of the Maharal, along with his name, the acronym composed of Hebrew initials and the dates 1609–2009, representing the Maharal’s death and his 400th anniversary (Maharal died on the 18th of Elul 5369 according to the Hebrew Calendar, which is 1609 in the Gregorian Calendar). In the background can be seen the front portal of the Old-New Synagogue nave with its characteristic tympanum, featuring a grapevine relief. The four spiral vines are symbolic of the four rivers of Paradise. The dark field at the front contains the centuries-old emblem of the Prague Jewish community – the Star of David with the medieval “Jewish hat” in the middle.

The stamp was designed by the painter and engraver Karel Zemna and drawn and engraved by Jaroslav Tvrdoň. It was printed by the Postal Stationery Printing House (Poštovní tiskárna cenin, a. s.) in full-color offset with sheets of five stamps and four coupons, and has a picture size of 23 x 40 mm. The coupon, which is the same size as the stamp, features a depiction of a cup with the caption “RABBI LOEW’S CUP” – one of the few relics which according to tradition are said to belong to the Maharal. The lit round window of the eastern section of the Old-New Synagogue appears on the background of the stamp. The coupon was also printed in full-color offset. A first day envelope with a depiction of the Golem – whose creation is ascribed to the Maharal in numerous romantic legends – has also been issued for the stamp. 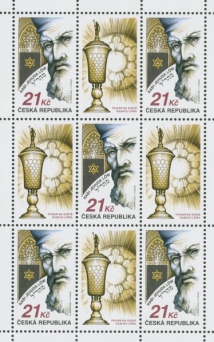 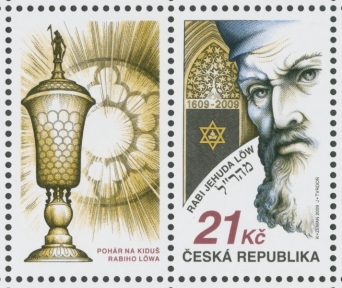 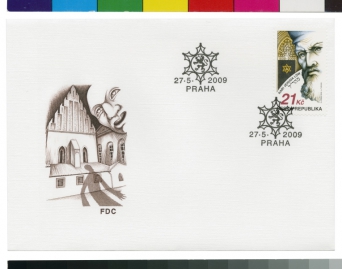 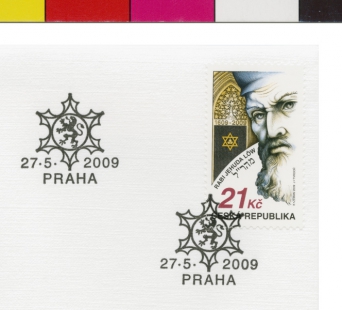